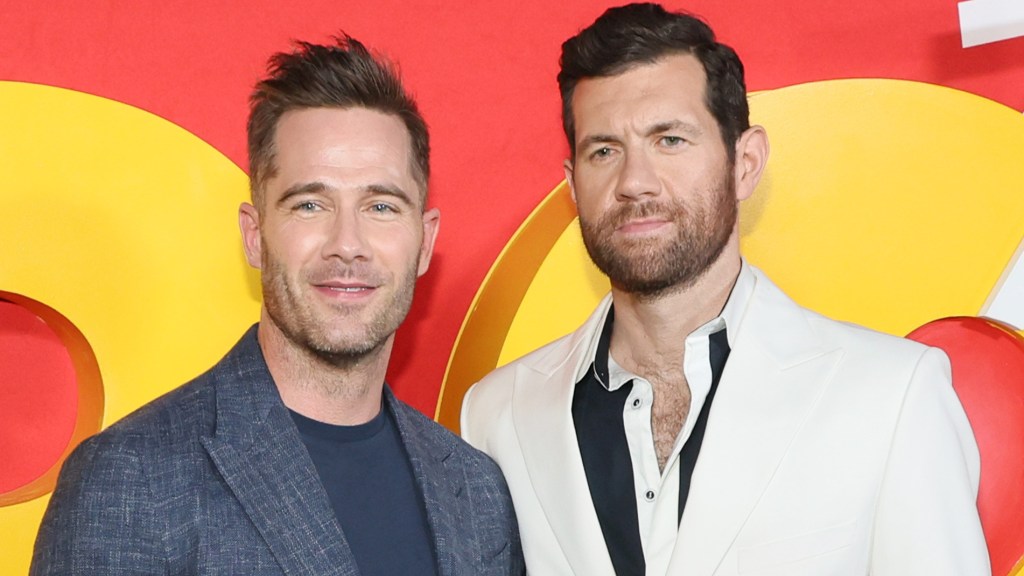 Are We Witnessing the Beginning of the “Bros” Cinematic Universe?

Billy Eichner stars in the Universal Pictures rom-com as the director of an LGBTQ history museum who falls in love with a handsome lawyer (Luke Macfarlane). After scoring positive comments on TIFF, Variety was on the film’s red carpet in New York City on Tuesday night to ask if a potential sequel is in the works.

“Billy and I joked about… [the possibilities]I’m not sure what it would be,” Macfarlane told Variety. “The truth is that in any relationship those first months are the best. And then the reality of life kicks in and you have to think about how you’re going to spend all that time with someone.”

He continued: “I trust Billy Eichner’s genius to come up with something clever for three years.”

Macfarlane hopes a second film will include musical scenes. “All I’ve said to Billy is, ‘I want a chance to sing too,’ so he has to find a chance for me to sing a song. [Billy] sings beautifully!”

Jim Rash, who plays a bisexual board member of the LGBTQ history museum in the film, is all set for a musical sequel. “I took singing lessons during the pandemic, so I’m all set. I’m also a tenor, so I can hit some high notes,” Rash told Variety.

Guy Branum, who plays Eichner’s best friend in the film, said he’d like to see a “sassy gay buddy cop movie.” “That is the logical next step. You have a ‘Bridesmaids’ and then you get ‘The Heat’”, he said.

When Variety asked producer Judd Apatow what the best idea for a spin-off would be, he argued for a movie about the sign in the LGBTQ museum: “I think they would all make a great movie for sure.”

Eichner also spoke about the surprise return of “Billy on the Street,” his hit show produced by Funny or Die that ended in 2017. The comedian was hesitant about making more episodes in the future.

“On special occasions like this you never know,” he said. “I’m not going to do it as regularly as I did it. If there’s a reason to bring it back, maybe I will.”

In the new episode of “Billy on the Street,” Eichner ran with Paul Rudd through the streets of New York City trying to convince straight guys to see “Bros.”

“Bros” will premiere in theaters on September 30.