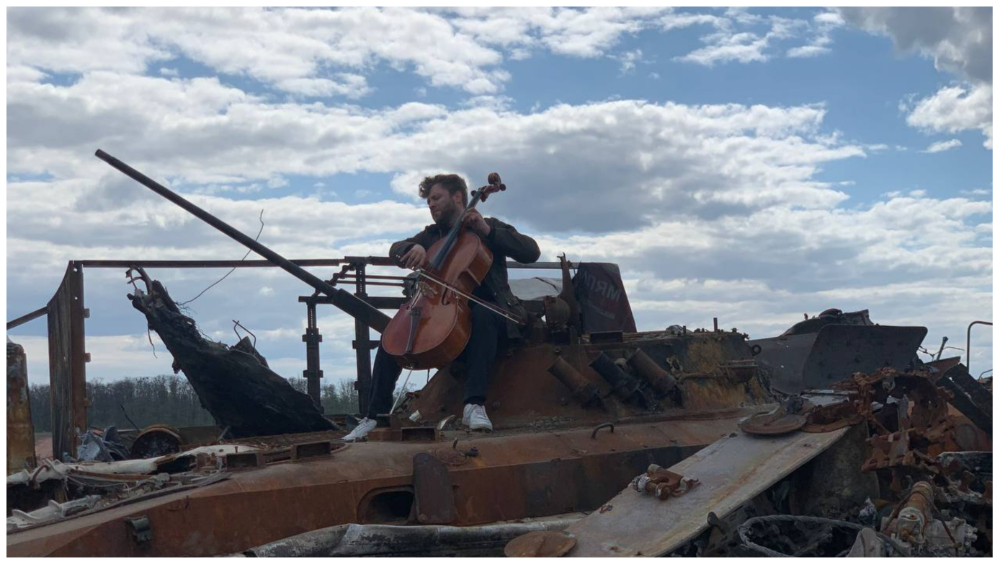 Acclaimed cellist Lukas Stasevskij is pursuing his film dream with the documentary “My Ukraine”, which is currently in development and will bow at the Finnish Film Affair film industry event next week.

The film is produced by Tero Tamminen (East Films) and Ilona Tolmunen (Made), also behind Aino Suni’s “Heartbeast”, recently picked up by France’s Wayna Pitch.

“When Lukas approached Tero Tamminen and they called me, we were both immediately interested,” says Tolmunen. Varietypraised Stasevskij’s “universal” story about finding your identity and understanding the meaning of roots.

“We are aware that there are so many stories coming out of Ukraine right now, but ours has a link between Ukraine and Finland. As a filmmaker, Lukas is at the beginning of his career, but as a professional cellist he has a unique way of approaching the world.”

The film also does not shy away from classical music. After the invasion, Stasevskij went viral thanks to videos in which he starred in the midst of destruction and ruin.

“At first I thought it was stupid: why the hell would I do it? But many Ukrainians were affected by it. They thought it showed that our culture was still alive,” he says.

Born into a family of artists – his sister Dalia Stasevska is the principal guest conductor of the BBC Symphony Orchestra – he moved to Finland as a child, where he developed a “problematic relationship with Ukraine”. In 2021, he decided to embrace his background and focus on filmmaking, ready to study directing in Kiev.

“And then the war started,” he says. But he decided to stay.

“I’m not just another war tourist who came here after it started. I wanted to make Ukrainian films and I couldn’t just leave. It was quite chaotic in the beginning, I had a Finnish passport and no military training. Then [Finland’s broadcasting company] YLE contacted me and I started filming,” he explains.

“I wanted to make fiction films, so it’s crazy that I ended up making a documentary about myself. I’ve been performing all my life, but it still feels really weird.”

Influenced by images of the Maidan Revolution, Stasevskij moved to Ukraine to find his identity, but realized that others were also questioning him when the conflict began, especially Russian-speaking Ukrainians, and encouraged him to weave multiple stories together. .

Does he feel Ukrainian now?

“Someone asked me that when I first moved here. I will always have Ukrainian roots, no one can take that away from me. But it is a complex issue. Some Ukrainians say I’m Finnish, Finns say I’m Ukrainian. My biological mother is Lithuanian. It’s not about your ethnic background, I guess. It’s about what you feel.”

Self-identification is a process, he says.

“When I was still in Finland, I was ashamed to be Ukrainian. Then something changed. It’s good to think about these things sometimes and I hope this film will encourage others to do the same.”

Before the war, Stasevskij was working on a “Django Unchained”-esque revenge story about a girl who tries to get even after her boyfriend is shot during Maidan protests.

“I wanted to show that people are finally getting justice. But after the war started, a producer told me that we should show Ukraine in a different light, because we still have a sense of humor, we still have a better side.”

A slew of celebrities who visited Ukraine, from Sean Penn to Ben Stiller, also praised their resilience. But Stasevskij remains skeptical.

“We live in this meme culture and everyone wants to belong. It is not forbidden for non-Ukrainians to make films about Ukraine, but there has to be something real and honest about their approach,” he says.

“These very first days were so dramatic. You didn’t know what happened. I was in a bomb shelter and felt hopeless. I wonder how it is possible that these bastards just come here and destroy everything I love.”

“I would say it was important to show that people were fighting back then, even though they didn’t think they had a chance. Now it’s different. Now we have hope.”