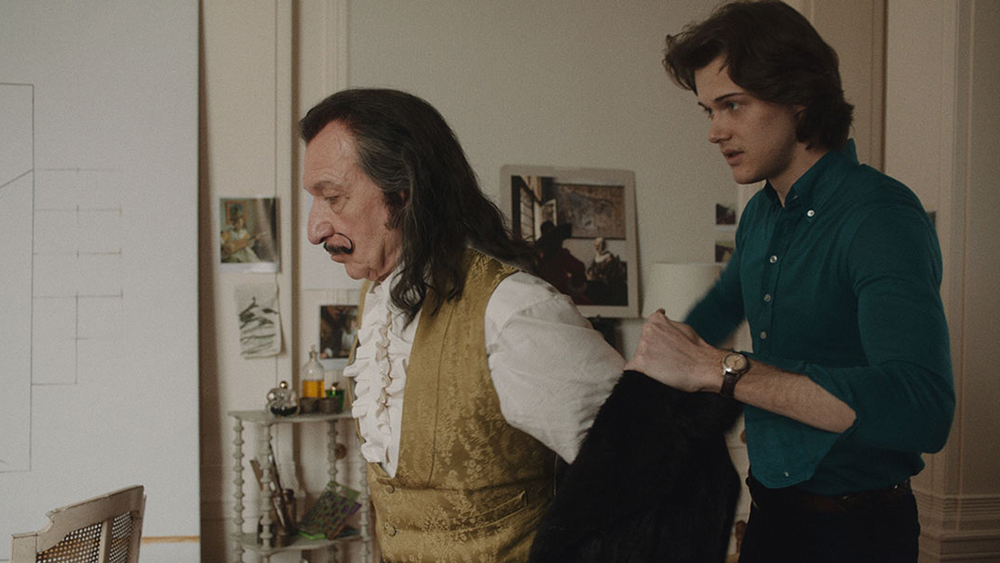 There’s a genre that I love so much that I can never get enough of it – I call it the biopic about someone you wouldn’t make a biopic about. The form originated, in a way, with “Sid and Nancy,” but it was almost patented by screenwriters Scott Alexander and Larry Karaszewski, who put it on the map in 1994 with “Ed Wood” (still the “Citizen Kane ” of the genre), then went on to script “The People vs. Larry Flynt”, “Man on the Moon” (about Andy Kaufman), “Big Eyes” (about the painter Walter Keane and his wife, Margaret, who the painter behind the throne turned out to be), and “Dolemite Is My Name” (about the lazy con-comedian Ray Moore). There are movies in the genre from other angles, such as Paul Schrader’s amazing “Auto Focus” (about TV star Bob Crane and his video fetish sex life), which was featured by the recent Toronto Film Festival sensation “Weird: The Al Yankovic -story.”

But there is one director who has been a giant in this genre, even though people don’t think that about her. That’s Mary Harron, the wickedly gifted misfit who turns out-of-the-box biopic voyeurism into an artful obsession. You get the sense that Harron, who started out as a punk music journalist, doesn’t care about making the respectable movies she’s supposed to be making. She makes films about the people who fascinate her. Her first feature film was “I Shot Andy Warhol” (1996), and it’s still a thriller, one that dared to treat Warhol’s demented would-be assassin Valerie Solanas as a feminist heroine (without admitting in any way how unhinged she was ), even though it gave us the best portrait of factory life ever filmed. Since then, Harron’s films have featured the delightful and revealing “The Notorious Bettie Page”, the intrepid TV movie “Anna Nicole” (about Anne Nicole Smith) and “Charlie Says” (about Charles Manson and family life, which Harron just caught. as convincing as the inhabitants of Warhol).

Her new film is ‘Dalíland’, about the Spanish surrealist Salvador Dalí, and you could say that, unlike most of the others, Dalí is a perfectly clear subject for a biopic. as, along with Picasso, he was the most famous painter of his time. But the unusual/behind the curtain aspect of “Dalíland” is that the film is about Dalí when he was an old man (played in Sir Ben Kingsley’s film), a ravaged but still forbidding carousel who, in his early 1970s, it had made its mark to treat life as a never-ending act of surreal theater.

In “Dalíland,” there are two flashbacks to the young Dalí (where he’s played by Ezra Miller, who looks uncannily like him), but the heart of the film is a wide-eyed eavesdropping on the man who became Dalí—and therefore maybe, always was – when he’d gotten past the sweet spot of his early celebrity and controversial genius. That’s the lofty tabloid Harronesque element of the film: it’s a portrait of the artist as what happened? relic. In that respect it is both a very entertaining film and, towards the end, a haunting film. It relishes Dalí’s artifice, even as it mercilessly peels off its layers.

Harron, working from a script by John C. Walsh, opens the film in a comical tone, with a clip of Dali from the late ’60s on the TV game show “To Tell the Truth”, where he answers every question. (“Are you a leading man?”) with the same surly “Yes.” Then, in 1974, we went to New York City, where James (Christopher Briney), an art school dropout and assistant/apprentice/gofer at the Dufresne Gallery, was tasked with delivering a bundle of cash to Gala ( Barbara Sukowa), Dalí’s wife, in their suite at the St. Regis Hotel. The two stay there every winter, in the same suite, for $20,000 a month, and as soon as the door opens, we’re swept up in what appears to us to be an alternate universe.

There’s a party going on, but it’s noon, and there, in the midst of it all, stands Dalí, larger than life, in his trademark flowing locks and long curly dada mustache, courting in a way that is both inviting and prohibitive. He dresses in fringed shirts and floral long coats, like an elderly reckless Spanish space cowboy. He speaks only in pensées and only refers to himself in the third person, as ‘Dalí’. Everyone also calls him Dalí. He is not just any person; he is a household name. Every moment is imbued with a sense of being in the presence of something darkly magical, the great Dalí, who in Dalí’s eyes is the only artist of his time who can be compared to the pioneering artists in history.

Interestingly, this perception, while an outgrowth of his megalomania, is also based on the fact that he is a figurative painter. That’s part of what made Dalí such a popular artist, even though the critics couldn’t make up their mind about him. “The Persistence of Memory,” with its imaginary topography and melting dials, may be a surreal vision, but there’s a delightful concreteness to it. It’s as real as a dream. Dalí hates abstract painting, even to the point of seeing it as a form of decadence. (In that sense, he has something in common with the Nazis.) He sees himself as the last classicist to keep in touch with the pre-modern world. But, of course, his art is all about the modern mind – the madness of what the everyday experience was becoming in the 20th century. He’s really the first pop artist, so he’s a contradiction, a joker of paradoxes. And he’s orchestrated his entire existence to make that a form of theater.

Kingsley plays him with big dark eyes that can be volcanic in their rage, then look as if they’re crying a moment later, even if they sparkle with glee. Is this Dalí a mockery, or is he really crazy? (The answer could be both.) Dalí leads his parties, which are filled with aging aristocrats and gorgeous young studs and debutants, like an imperious ogre who is also a god. At first glance he looks like a typical aging parasite, almost a character from de Sade. His latest mistress is Amanda (Anreja Pejic), a transgender beauty with a hoarse, knowing voice, but Dalí, as we learn, doesn’t have sex (although he does like to watch).

His wife compensates for what he does not do. Gala, played by the formidable Barbara Sukowa, is Dalí’s muse, agent, matriarch, tormentor and partner in crime. The two fight like cats and dogs, but this fuels his art. He’s working on a new show, with a deadline of three weeks, and only Gala has the power to force him to lay down and finish it. At the same time, she is out alone, enjoying her boy toys. She’s 10 years older than Dalí (which makes her 80 years old at the time the movie takes place), but she likes her men young and hot. Her new plaything is Jeff Fenholt (Zachary Nachbar-Seckel), who plays the title role in the original Broadway production of “Jesus Christ Superstar”, and who also has aspirations to become a pop musician, a wish Gala is all too happy about. banking.

James, Dufresne’s courier, is warned about Gala; if he’s not careful, she’ll eat him alive. He stands his ground and resists her advances, despite looking good in a Gerard Malanga/Jim Morrison sort. That his looks make him an instant entrance is the tip that the Dalí demimonde, with his daily cocktail of drugs and booze and fame, his sexual ambiguity, his bed-hopping vipers and hangers-on, is really a version of the Warhol factory, only in this case there is no Factory; there’s just Dalí in the St. Regis trying to squeeze out a new show. He likes James, understands that he can be trusted and offers him the chance to be his assistant for these few weeks. Christopher Briney, whose only previous credit appears in the Amazon series “The Summer I Turned Pretty”, is a very good actor who invests James with a presence of mind and a wily curiosity that becomes a stand-in for ours. Still, we can’t say we have a full investment in this protagonist behind his tour guide role.

The Salvador Dalí of “Dalíland” is a man who uses art to try to transcend the fact that he is human. That’s why even his mustache is a work of art. (We see him painting and waxing into a sculpture.) He and Gala play as if they were the king of the queen of their own stratosphere, but the truth, which the film reveals step by step, is nastier. These two are love-hate, but they have also participated in a desperate conspiracy to support Dalí’s legend as a hologram. The film flashes back to the time they met, and Ezra Miller’s performance is lively (in part because the scandal of his off-screen behavior almost plays into it). There is also a scene in which the young Gala (Avital Lvova) reacts to Dalí’s painting “The Persistence of Memory” in 1931, although no matter how deftly the scene is written, it cannot but the fact that Harron was unable to rights to exhibit Dalí’s paintings.

Through the film’s 1970s setting, it is a portrait of the moment when the art world underwent a tectonic shift, merging with money culture and becoming a sort of piggy bank for the wealthy. And Dalí and Gala have responded to this in their own way. They are exploiters of Dalí’s legend who in turn have been exploited. But that’s partly due to a major paradox that lies at the heart of the film: Dali, like Warhol, appears to be an incomparable marketer of his own celebrity, but in Dalí’s case, the image is so scandalous that it has overtaken art and even has defeated . No one takes him seriously anymore; when his show finally kicks off, with some important work in it, most major critics don’t even bother to review it. “Dalíland” begins as a breathtaking tour of the world’s most frenzied sideshow. But it becomes an ordinary tragedy about a man who has turned his identity into a work of art and in doing so has squeezed life itself from the canvas.