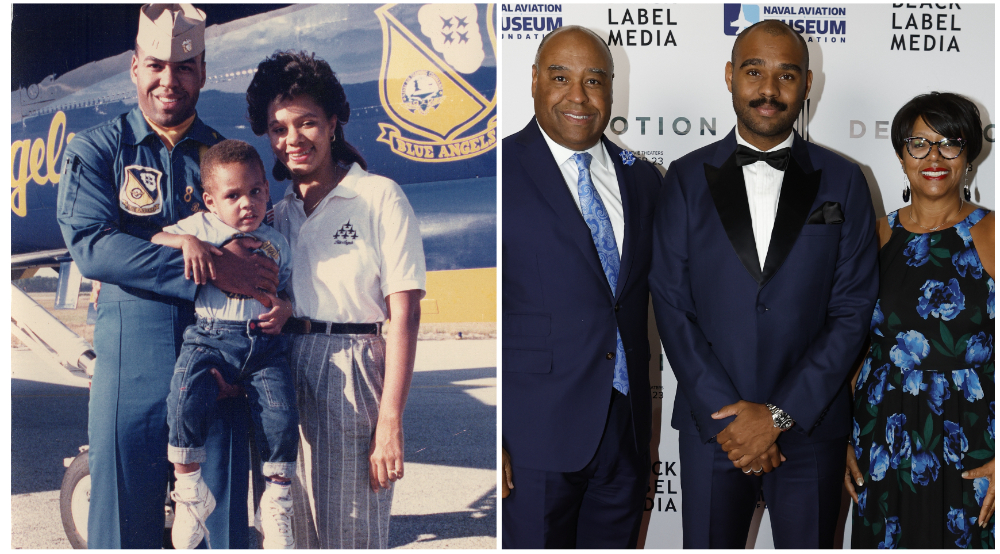 Some of “Devotion” director JD Dillard’s earliest memories are of the roar of F/A-18 jet engines.

“It’s quite abstract,” Dillard says Variety above Zoom, recounting his emotional memories when he was about four years old, wandering around the Blue Angels’ headquarters in Pensacola, Fla. The filmmaker’s father, Bruce Dillard, was stationed there after becoming the second African-American to fly with the Naval Flight Demonstration Squadron.

“I remember shapes. I remember the nose of an F-18,” Dillard continues. “I remember the little pylons that hold up the railing next to the entrance, the smell of the laundry they use to clean the planes, and the sound that rumbles in your chest.”

A few weeks ago, as part of the promotion for “Devotion” – which tells the story of the unbreakable bond forged between elite naval aviators and Korean War heroes Ensign Jesse L. Brown (Jonathan Majors) and Lieutenant Thomas Hudner (Glen Powell) – Dillard returned to Pensacola, referred to as the “Cradle of Naval Aviation.” He was invited to ride in the backseat with a Blue Angels pilot, so of course he brought his dad along.

“When I got to the tarmac and heard those planes take off, it was like, ‘Oh my God,'” says Dillard, adding that those childhood memories immediately came flooding back. “When I learned what sensation was, these were the sensations I felt.”

The view, however, was markedly different from when he was about two feet tall and saw his father flying. To some degree, Dillard knew what was in store for him, having grown up watching the VHS tapes of his father’s rear camera footage.

“I remember practicing the breathing you have to do when you pull G’s because I watched him do it,” says Dillard. “I think my obsession with masked characters in movies came from seeing my dad [with his] helmet and visor down. That’s probably why I love Boba Fett.”

This time, however, Bruce Dillard watched from the ground as his son climbed into the back seat of the Super Hornet jet and flew away. The younger Dillard put on a respectable showing by holding his own (and eating his lunch) as he pulled 7.2 G’s.

“Not vomited, not passed out; my father didn’t disown me,” he says with a chuckle. “Sure, made him proud when I landed and shook two empty puke bags.”

All jokes aside, it was an emotional experience for both father and son. “Weirdly, the most overwhelming part was getting the footage back,” adds Dillard. “Because I suddenly had my father’s video. That was just really weird.”

The flight effectively ended a loop that started when the older Dillard attended an air show as a kid, just like Jesse Brown, and said, “I want to fly.” Bruce Dillard’s “relentless pursuit of a dream” deeply influenced his son to do the same, eventually leading to Dillard directing “Devotion,” his third feature film, which in many ways is a version of his family’s story .

“Now we’re here in Pensacola, where these dreams, 30 years apart, collide,” says Dillard. “It was pretty emotional for the entire Dillard text chain.”

The Dillard family’s tour of duty on “Devotion” – where the director has accumulated so much flight time that he went gold and platinum on three different airlines – also included highlights such as Dillard receiving the Rising Star Director award at the SCAD Savannah Film Festival, the film that won the Audience Award at the Middleburg Film Festival and a ceremony at the Naval Aviation Museum where Brown and Hudner were inducted into the Hall of Heroes. Dillard attended the event with both his father and mother, Gerri Dillard, Powell, and the Brown and Hudner families.

“It was very special to be in this place where both Tom and Jesse and my dad had to learn how to fly,” he says. “To be back there with a group of people who know my dad, who know Donnie Cochran – the first Black Blue Angel, who was there and helped get my dad on the team – who know the Hudners, know the Browns, the felt like a homecoming.”

A young JD Dillard and his father, Lieutenant Bruce Dillard in June 1989.
Courtesy of JD Dillard

Even more special was a plan by “Devotion” producers Black Label Media – the film financing and production company founded in 2013 by partners Molly Smith, Trent Luckinbill and Thad Luckinbill, who co-produced the film with Molly’s sister Rachel Smith – to lead a part of the film’s box office to profit the Brown Hudner Navy Scholarship Foundation.

“When Jesse died, Tom and the squad set up a scholarship to help his wife Daisy and daughter Pam go to school,” Dillard explains.

Brown’s fellow sailors raised the equivalent of $24,000 for the family today, with Daisy Brown becoming a schoolteacher and then the scholarship fund developed into a permanent institution. Now run by the Marine Corp Scholarship Foundation, more than $155 million in scholarships have been awarded over the past 60 years.

“We started working on the scholarship fund from the moment we greenlit the film in the spring of 2020,” said Molly Smith of Black Label Media. Variety via email. “Black Label has a long relationship with Tom Rothman [Sony Pictures Entertainment chairman and CEO] and Sony, who agreed to distribute the film and have been great supporters of this story. We are all honored to tell this story and honor the sacrifices of these men.”

Smith explained that the equity in the film has already been donated to the scholarship fund, and after that is earned and all back-end participations are paid, all future earnings will also go to the scholarship fund, which can be applied for by the children of a active duty, reserve, honorably discharged, or fallen seaman. Other eligibility criteria include: a GPA of at least 2.0; have demonstrated financial need; and plans to pursue a degree in science, technology, engineering, mathematics (STEM), or health sciences.

The unique plan to donate most of the film’s proceeds came from Smith’s father, Frederick W. Smith, a Marine Corps veteran, FedEx founder, and the foundation’s first benefactor. “Seeing the movie has a double benefit because it will educate a lot of old Navy and Marine kids,” Smith said. in an interview with the Marine Corps Association.

There was a lot of red tape, but when all the i’s were done and T’s crossed, Black Label Media shared the good news with the Brown and Hudner families and the scholarship foundation. “They were excited and very moved,” writes Smith.

Dillard describes the box office plan as the “clash of impact and entertainment, in a way that feels organic.”

“To see this thing calcify where we could do something really unheard of, in terms of our release actually having an impact component – ​​and not just to ‘shine the light on this and donate it,’ but to have a financial and creating business infrastructure, where the movie could continue that Jesse and Tom legacy — it just felt like a really nice way to bring the movie back to real life.

Plus, Dillard knows the struggle. Years after Bruce Dillard was honorably discharged from the Navy, Dillard pursued his love of filmmaking, attending Syracuse University before transferring to the University of Southern California due to its proximity to Hollywood. He dropped out after a semester because he couldn’t afford it.

“As someone who had to drop out for financial reasons, I know very tangibly what that decision entails, so it’s incredibly meaningful,” Dillard says of the scholarship. “It’s one of my favorite things about the movie because it can be more than movie in a way.”

While Dillard’s own military background put him in a unique position to bring this naval legend to life, his goal is to continue to tell stories that “play with the breadth of black wish-fulfillment,” transforming the lives of black people. space and scale. It’s a through line he’s noticed between “Devotion” and his Sundance hits “Sleight” and “Sweetheart.”

“[The protagonists] are three characters who are told very specifically what they are capable of, in a limiting way, and overcome that to the limit,” Dillard explains. “I really feel like I’m here to say it That stories.”

He adds: “As I slowly lower my gaze to the horizon – we still have a lot of sailing to do on ‘Devotion’ – I know that’s what I’m looking for. Our stories deserve to be told big and loud.”