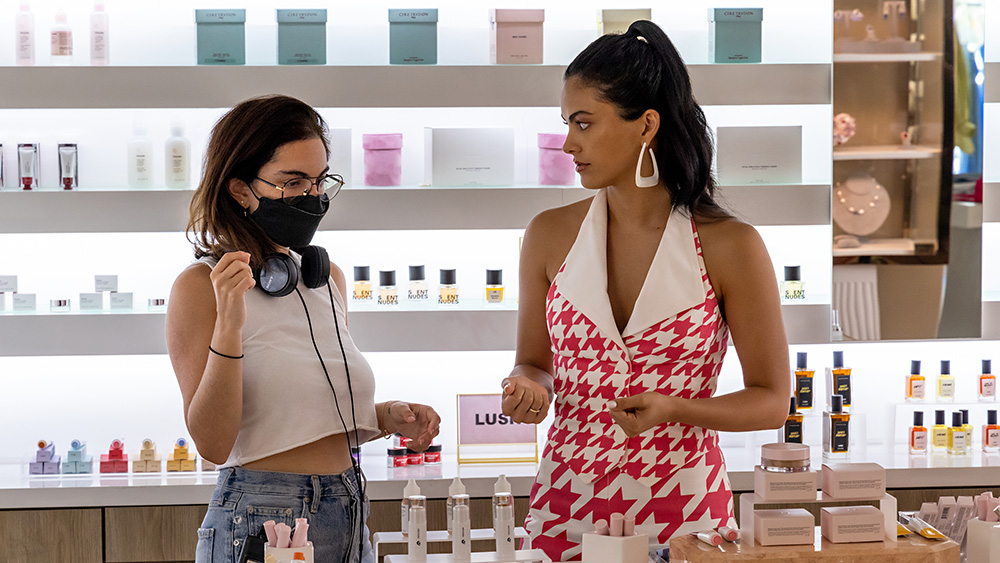 Some people look back on their high school days with a certain nostalgia; others couldn’t be paid to revisit that particular part of adolescence… thank you very much.

Filmmaker Jennifer Kaytin Robinson falls completely into the latter category, although she admits she is at least partially responsible for the bad memories.

“I was a bitch,” she says with the kind of laugh that comes after years of self-reflection. “I was unhappy, so it showed because I paid for that accident. I love my family… but they can only do so much.”

Robinson, now in his thirties, happily relives her teenage anxiety in “Do Revenge,” a Hitchcockian high school comedy that debuts on Netflix on September 16. It’s a welcome return to the YA genre for Robinson, who recently co-wrote this summer’s blockbuster ‘Thor: Love and Thunder’ with Taika Waititi. She first made her mark on streaming with Netflix’s “Someone Great,” a funny and moving ode to love and female friendship, starring Gina Rodriguez.

When Robinson put the finishing touches on “Someone Great,” which premiered and acclaimed in 2019, she spent her downtime watching another Netflix rom-com, “To All the Boys I’ve Loved Before.” . That high school story, which also struck a chord with young wireless viewers, got Robinson to think about the campy teen movies of her formative years, such as “Cruel Intentions,” “Clueless,” “Jawbreakers,” and “Heathers.” She remembers thinking, “Damn, this movie just isn’t being made anymore.”

“Do Revenge” is the director’s candy-covered attempt to fill that void. Though Robinson, like the film’s main characters, went to a posh prep school in South Florida, the film isn’t exactly autobiographical. Instead, her second feature film is inspired by Alfred Hitchcock’s “Strangers on a Train” and follows two high school students who team up to take down each other’s enemy. Drea, played by “Riverdale” star Camila Mendes, wants to go back to her boyfriend for a sex tape leak; Eleanor, a transfer student portrayed by Maya Hawke known as ‘Stranger Things’, sets out to save her reputation after being ridiculed and accused of sexually assaulting another girl at school.

Maya Hawke and Camila Mendes Star in “Do Revenge”

The similarities with Robinson and her on-screen heroines may begin and end in their hometowns, but she can empathize with the feeling that she’s just trying to survive the humdrum horrors of high school. “That drive to do what you need to do to get through the day — even if that’s something that when you look in the mirror, you don’t like what you see,” she says, “that was a big part of my high school experience.”

She looked to her young actors to offer a certain Gen Z sais quoi to the script (and she credits the film’s co-writer Celeste Ballard for coming up with the exceptionally titled Cis Hetero Men Championing Female Identitying Students League, a club founded by Drea’s ex), though she claims the high school experience – for better or for worse – is evergreen.

“Times are different, but the feeling of being in high school and that fear and pain and hormonal feelings is common to everyone,” she says. “Everything feels so big. Nothing ever feels as great as when you are 17 or 18.”

Still, the film is far from a downer. “Do Revenge” is a “big and bright” ode to 90s film and fashion with a decidedly modern flair. Intensely involved in everything from costumes to musical styles, Robinson struck that balance with a soundtrack featuring Gen Z icons like Billie Eilish and Olivia Rodrigo matching each other and preppy clothes that would make Cher Horowitz proud.

Hawke, who remembers contacting Robinson during her Zoom audition, praises her director for giving the actors “an enormous amount of room to play”.

“She has this combination that is so rare,” Hawke says. “Usually a director has one or the other: they either have the ability to know what the camera is doing, or they have the ability to interact with actors and understand the emotional landscape of the scene. It sounds crazy that not all directors are like that. But boy… aren’t they?’

Robinson’s own interests often emerge in unique ways in her films. Swifties already know that “Someone Great,” inspired by Taylor Swift’s break-up anthem “Clean,” later became the impetus for Swift’s song “Death By A Thousand Cuts.” And do you remember the “Phantom of the Opera” sweatshirt worn by Tessa Thompson’s Valkerie in “Thor: Love and Thunder”? That’s from the mind of Robinson, whose daily uniform on the set of the Marvel film consisted of Broadway-themed loungewear. “Taika said, ‘That’s dope. Let’s put it in the movie,'” she recalls.

Before ever stepping into the writer’s room for Disney’s fourth film about Chris Hemsworth’s chiseled God of Thunder, Robinson considered herself a Marvel obsession. She and her brother, who also works in the film, have seen every MCU movie in theaters on its opening weekend since “Iron Man” in 2008. In fact, the world of comic book heroes heavily influenced Robinson’s critically acclaimed but little-watched 2016 MTV series “Sweet/Vicious,” a teen drama about college students taking revenge on sexual predators. Despite critical acclaim, MTV canceled the show in 2017 after one season.

She has no ill will towards MTV. “They let me creatively create the show I wanted to make,” she says. On the other hand, she continues, ‘Did they promote it? No. Did anyone know about it? No. Did they premiere it on Election Day in 2016? Yes. Yet she persisted.”

Robinson may have been down, but she wasn’t out of the Hollywood vibe. Shortly after “Sweet/Vicious” got the ax, she told her agent about her ambitions to embark on another vigilante adventure. Around 2016, she pitched a few ideas to Marvel Studios boss Kevin Feige, who eventually hired Robinson to help write “Thor 4.”

“I think Taika and I have very similar sensitivities and sense of humor,” she says. “They felt we would be a good fit, and we did.”

With $755 million at the box office worldwide, “Thor: Love and Thunder,” Robinson enters a new phase of her career, armed with the confidence she needs to remain selective in the work she takes on.

“I’m in a place where ‘no’ is a word I can use, and I feel very privileged,” she says. “As a woman, you train yourself to take everything because it can all disappear.”

Robinson is already working on two new films, neither of them wants to reveal too much. One is a campy slasher movie (she teases the movie as the perfect sequel to “Do Revenge”), and the other is a psychological feminist tale. After a taste of theatrical success with “Thor 4”, those movies to play on the big screen.

“I would like my next movie to be theatrical,” she says. “I’ve never been able to sneak in the back on a Thursday and watch a movie with an audience.”