Home News Film James Bond producers looking for the next 007 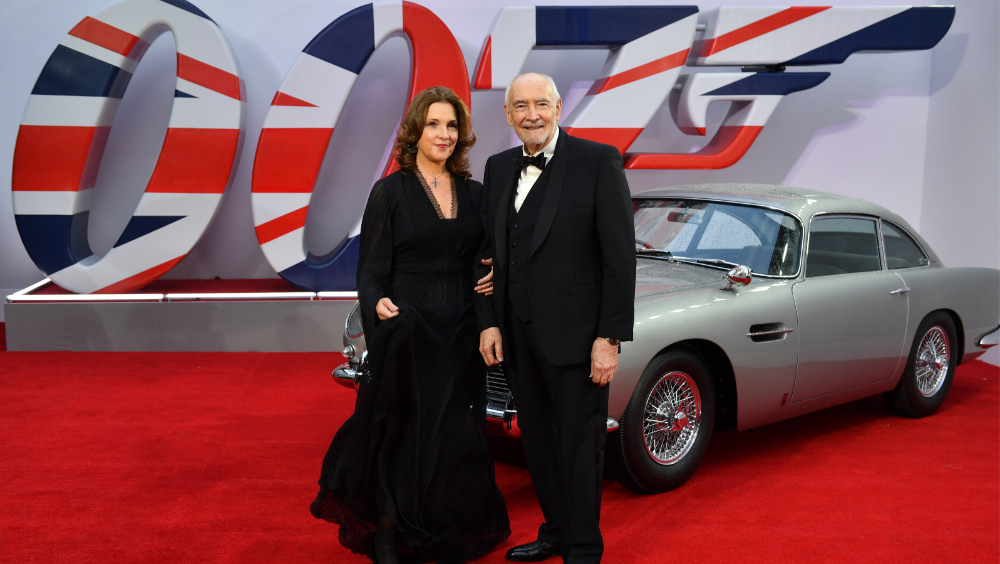 The James Bond landing may be the biggest acting gig in Hollywood, but 007 producers Barbara Broccoli and Michael G. Wilson say they still have to pitch potential actors.

When Variety Catching up with Britain’s most famous producers at the end of August, they’re busy preparing for Bond’s 60th anniversary in October. But the search for a new actor to play the world’s most famous spy is quietly rumbling in the background. It’s still ‘early’, they claim, but whoever gets the part has to be in it for the long haul.

For a while, that person seemed to be Idris Elba. But the ‘Luther’ star recently said he didn’t see Bond when he ‘looked in the mirror’ — comments some have interpreted as Elba’s goodbye to 007.

Broccoli and Wilson hadn’t talked to the Bond candidate recently at the time of this interview, but they say they understand. “He’s great,” Wilson says, and Broccoli is quick to add, “We love Idris.”

“The point is, it will take a few years,” she notes. “And when we cast Bond, it’s a 10, 12-year commitment. So he’s probably thinking, ‘Do I really want that thing? Not everyone wants to do that. It was hard enough to [Daniel Craig to do it].” Wilson interrupts: “And he was in his early 30s then!”

The producers sit at a round table in their spacious office in Eon House, the headquarters of their production banner Eon Productions – a stately, towering Edwardian house on London’s Piccadilly, overlooking Green Park and nearby Buckingham Palace.

The half-siblings — whose mother Dana Natol was married to Broccoli’s father, Albert R. “Cubby” Broccoli, the co-founder of Bond — have been Bond’s caretakers since “GoldenEye” (1995), starring Pierce Brosnan. They teamed up with the “Remington Steele” actor for a further three films – “Tomorrow Never Dies” (1997), “The World Is Not Enough” (1999) and “Die Another Day” (2002) – before hiring Craig for “Casino Royale”. (2006).

The duo formed a strong bond with Craig and together they developed the character over the course of four more films, including “Quantum of Solace” (2008), “Skyfall” (2012), “Spectre” (2015) and last year’s pandemic. year. “No Time to Die” postponed before Craig retired as 007. Well before the star’s final turn, however, there was much speculation about his replacement, and Broccoli and Wilson have been questioning the franchise’s next chapter for years.

Most young actors, Broccoli and Wilson say, think they want to play Bond but don’t quite understand the commitment to carry a franchise over many years. “A lot of people think, ‘Oh yeah, it would be nice to do one,’ Broccoli laughs out loud. “We will. That’s not going to work.”

It’s also a matter of resources for Eon Productions, explains Wilson. “It’s also a big investment for us to release a new Bond.”

Ultimately, the casting process isn’t just about choosing someone for a role in a movie, they emphasize.

“That’s why, when people go, ‘Oh, who are you going to get?’ it’s not just about casting an actor for a movie, it’s about reinvention, and ‘Where do we take it? What do we want to do with the character?’” Broccoli says. So who is the right person for that particular reinvention?

“Of [Craig]when we had the talk at this table about, you know, [whether he was] going to do it, he said, “Well, I’m going to do it. I really want to be a part of it, the whole thing.” And he lived to regret it,” Broccoli says with a burst of laughter. “But it’s a big commitment. It doesn’t just show up for a few months of filming.”

As Brosnan once said, she quotes, “More people have walked on the moon than played James Bond.” (Indeed, there have been only six Bond actors so far since the first movie, “Dr. No,” in 1962: Sean Connery, George Lazenby, Roger Moore, Timothy Dalton, Brosnan, and Craig.)

Both Wilson and Broccoli, who is the director of Time’s Up, the British branch of Women’s advocacy organization Time’s Up, made their mark on Bond, most notably by humanizing the spy who was once a woman and providing more satisfying, meatier roles for the franchise’s female stars. These are traits that will be continued in the following movies, Broccoli says.

“It’s an evolution,” she says. “Bond evolves just as men evolve. I don’t know who is evolving at a faster pace.”

Craig, she adds, “popped Bond emotionally open, bringing the audience into the character’s inner life. The films during his tenure were the first time we really connected the emotional arc.”

Another first for the producers is boarding a TV show based on Bond. As revealed by Variety earlier this year, Amazon’s Prime Video gave the go-ahead for its first TV series based on the iconic British spy with the adventure reality show ‘007’s Road to a Million’, a Bond-esque twist on a race around the world. .

“People have always come to us to do a TV show, [saying,] “Oh, you should do a Bond challenge,” but we always steered clear of it because we didn’t want to endanger people and make them do dangerous things because it’s not for members of the public – it’s for trained professionals,” explains Broccoli.

But “007’s Road to a Million” was the first time a producer — Britain’s 72 Films (“The Rise of the Murdoch Dynasty”) — approached the pair with an idea that seemed both “fun” and safe. “It wouldn’t be dangerous for the participants, that’s the most important thing,” Wilson notes.

Broccoli and Wilson are co-producing the eight-part series with 72 Films and MGM Studios. The show is now in production and “it looks really great,” Broccoli enthuses.

“The public will get a big kick out of it, which is why we agreed to do it,” she says. “I mean, it surprised us as much as everyone else. Like, wow, we’re going to do this.”

News of the show came just a week after Amazon closed its $8.5 billion deal for MGM in March, with the Bond franchise seen as a powerful driver of the acquisition.

When the proposed deal was first announced in 2021, Broccoli and Wilson were quick to quell any speculation about a streaming game for Bond and issued a statement assuring the public that the films would remain in theaters. . (Even in this interview, when asked if Amazon could ask for a storytelling Bond TV show, Wilson comments, “We’re trying to keep it theatrical,” and Broccoli is quick to reply, “Well, we’re going to take it theatrical.” We’re not going to try it; we have to do it. It’s just a theatrical franchise.”

But the biggest shock around the Amazon acquisition, they say, was the sudden departure of MGM movie bosses Michael De Luca and Pamela Abdy in April.

“It was a real blow when we lost Mike and Pam,” Broccoli says warily. “I mean, that was just — you know, we’ve had a rollercoaster ride over the years with MGM and United Artists and all that sort of thing, for many, many years. There have been many ups and downs and we were so pleased with their leadership and so look forward to a smooth sailing. And then a hurricane came and things changed.”

Broccoli would like to know who will replace the studio heads at MGM, which has no successor yet. Meanwhile, the producers are working “very closely” with Alana Mayo of MGM’s Orion Pictures division on the film “Till,” about Emmett Till, an African-American boy brutally murdered during a hate crime crime in Mississippi in 1955.

“She’s an amazing, amazing, talented woman,” Mayo’s Broccoli says. “I love working with her on this film and UA is a great team.”

If the breakup with Bond has accomplished anything, it has given the producers time and space to focus on “Till” and other projects, of which there are many. In addition to the October release of “Till’s,” Broccoli has a “Sing Street” musical staged in Boston, and another theater project with director Erica Schmidt in the works. Meanwhile, Wilson has written a TV show that the duo wants to put on.

In addition to being a board member of Time’s Up UK, Broccoli is chairman of First Light, a youth-focused film initiative, a founding member of the London Screen Academy and chairman of the National Youth Theatre.

The work of Time’s Up UK, Broccoli says, is “vital”, and there are plans to set up an independent standards body to tackle issues of sexual harassment and abuse. “It’s important that people have somewhere to go to hear their grievances, and there’s some sort of system in place to sort that out,” she says.

Broccoli and Wilson are also top industry leaders at the British Film Institute, which will soon be setting out its policy for the next ten years. Broccoli, former chair of the BFI UK Film Skills Taskforce, admits that while demand for production in the UK is “high”, it needs to be “maintained by a workforce”.

“We have a skills shortage and we have a diversity problem,” she says. “For me, I kept saying, ‘Let’s put them together.’ “Let’s educate people from different backgrounds for jobs that are needed. There are a lot of people who are super talented, but don’t necessarily feel that the film industry is for them.”

And aside from advising on the future of the British film industry, there is of course the question of Eon’s own next chapter. Asked about the company’s stewardship over the next few years, Wilson jokes that Broccoli is “the spring chicken” and at its peak.

Broccoli laughs along, but then gets serious.

“I’m going to die with my boots on,” she says. “My joy is my family and my job. I don’t see it as a burden. Every day you face new challenges, and it’s fun and it keeps you young.”

On September 21, Broccoli and Wilson received two Hollywood awards. In the morning, they will leave their hand and footprint behind during a ceremony in the forecourt of the TCL Chinese Theater. Later that day, at the Beverly Hilton, they will receive the Pioneer Award from the Will Rogers Motion Picture Pioneers Foundation, which honors industry leaders with outstanding philanthropic efforts and provides financial support to those in need in the distribution and exhibition industries.

“[Those who work in distribution and exhibition] are in many ways unsung heroes because they have been very challenging times,” says Broccoli. “Movie houses are where people go to dream, and we have to fight to keep them going. These are the people who fight the good fight. We have to support them.”