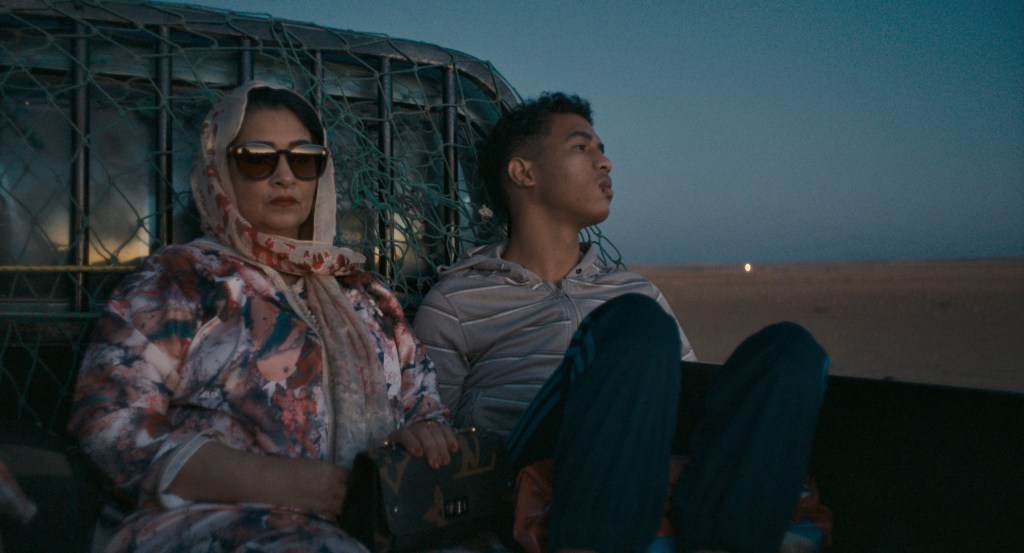 In the little-remembered 1950s noir “The Damned Don’t Cry,” Joan Crawford plays a Texan housewife whose grief for her late son prompts her to build a new life in the urban underworld. Fyzal Boulifa’s beautiful new movie of the same title is specifically named after that Crawford vehicle, but it’s not a remake or a direct tribute. Rather, it remixes the narrative components of that film and others of its ilk in the kind of new-school-old-school heart-tugger—one might say tearjerker if the characters aren’t, true to the title, stoically dry eyes everywhere—that would have been designed for the shoulder-padded diva if she lived in 2022 and, perhaps more importantly, of Moroccan descent.

The second feature film by the BAFTA-nominated British-Moroccan filmmaker Boulifa charts the turbulent relationship between a single mother and her teenage son on the destitute margins of Tangier society. his beautiful debut “Lynn + Lucy.”

Still, it’s not a complete immersion. In its fusion of Sirkian Hollywood melodrama with the highly sensitive emotionality of Arabic soap opera and a more austere form of European arthouse realism – with Pasolini’s “Mamma Roma” another clearly quoted influence – this haunting, idiosyncratic and often expressly strange tale of social isolation and the survival of outsiders feels like Boulifa’s own moving, idiosyncratic way of stringing the components of his cultural identity. After Lido’s premiere in the Days of Venice sidebar, this suitably dispersed co-production (Franco-Belgian-Moroccan, with the BBC Films imprimatur as its starting point) moves on to the main competition at the London Film Festival, with further festival bookings and specialist distribution across multiple territories is sure to follow.

If the tone and story are more expressive here than in Boulifa’s debut, the distinctive rigor of his mise-en-scene has been carried over: this time with Leos Carax’s favorite DP Caroline Champetier, Boulifa once again prefers tight, precisely composed scenes. often amounting to human still lifes, lighting and isolating small household and decorative details that reveal much about the airs and aspirations of Fatima-Zahra (Aïcha Tebbae), a never-married middle-aged vagabond who long ago left her Puritan hometown to to pursue a life full of glamor – and now supports herself and her son Selim (Abdellah El Hajjouji) with sex work.

Usually sharing a mattress in the small, dingy rooms they rent for just a few weeks before moving on, Fatima-Zahra and Selim’s relationship is less that of mother and son than of equal partners – full of Freudian undercurrents, only more complicated now that Selim, almost a man himself, is becoming increasingly aware of his own sexuality as a potential currency. When he discovers the long-hidden truth of his fatherhood, the bond between mother and son becomes strained; Determined to assert himself as the man of the house, he takes a series of jobs leading to a sort of houseboy position in a luxury riad owned by the wealthy, seductive Frenchman Sébastien (“BPM” standout Antoine Reinartz).

Initially, Selim was disgusted by Antoine’s advances, but gradually Selim thaws and succumbs, but that has huge consequences for his relationship with Fatima-Zahra – now on her own ‘Mildred Pierce’ path of self-reinvention as a sincere citizen. Though the film’s perspective is increasingly guided by Selim, “The Damned Don’t Cry” never loses sympathy for a matriarch whose life is so determined by the desires and violations of men that its own moral compass is up for sale.

Boulifa films Tebbae – like El Hajjouji and much of the ensemble, a non-professional – with a clear, compassionate lens that never patronizes or fetishises her suffering. Often styled with metallic-accented suits and lavish makeup reminiscent of Elizabeth Taylor mid-career, she’s a proud, regal presence even at her weakest. There’s an artless, heart-on-the-sleeve brashness in Tebbae’s performance that effectively contrasts with El Hajjouji’s more watchful, Lyncean physicality; as mother and son, they feel aptly modeled on separate generations of screen iconography, even though for much of their lives together they never owned a TV set to call their own.

Boulifa, on the other hand, blends disparate generations and geographies of big-screen and small-screen melodrama into a single, refined aesthetic that never sinks into simple pastiche or blinding kitsch. The dust and drabness of poverty is shattered by saturated hues that nod to heightened Technicolor realities that can’t last: the rich silk of Fatima-Zahra’s sparse but resourcefully recycled wardrobe, the unnaturally intense blue of the exotically designed, Western-designed riad. , crimson flower petals that over-bloom so decadently you can almost smell the rose water. “The Damned Don’t Cry”, at once lively and world-weary, goes through many a same old story – the resiliently carried oppression of women without men, men without fathers, cities without pity – known from real life and the cinema, and is equally attentive. for both sources.