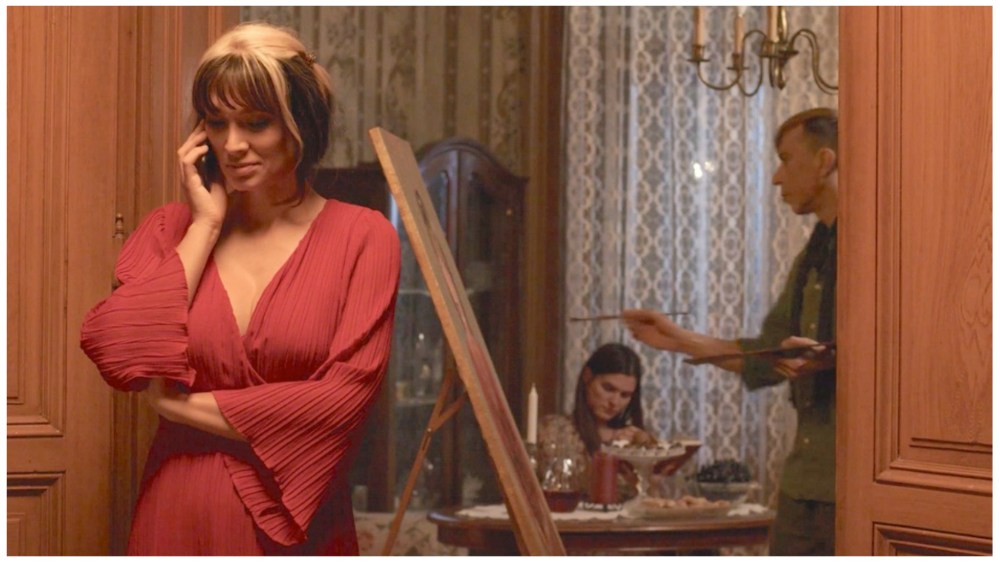 “First, I will ask you to take 10 deep, deep breaths.” Elegant Kristina attends a regressive hypnosis session. Lying on the floor, blindfolded, a female voice guides her through the process. Time seems to stand still. The viewer is immediately drawn into the scene, enchanted by the soft voice and the perfection of the image. The therapist then asks, “Now look down and tell me what you see?” “I see men’s feet,” says Kristina. “Take a deep breath and occupy that body completely.”

These first breaths open the film “Kristina”, selected in international competition at the Torino Film Festival. The care taken in the composition in the opening scene never leaves this first feature film by Serbian director Nikola Spasić, starring Kristina Milosavljević.

Kristina is transgender and left her hometown to live her truth in Belgrade. She collects antiques and lives alone with her cat in a sophisticated apartment fit for a decor catalog. There she receives her clients: Kristina is a sex worker. Her life, like her appointments, is precisely timed. Until the day she accidentally meets Marko, a former theology student. Coincidence then invites itself again and again into her orderly life: Kristina and Marko keep running into each other. Feelings develop. “But is this man for real?” Kristina wonders.

Distributed by United Kingdom’s Reason8 and produced by Spasić and its screenwriter Milanka Gvoić’s production company, Inkubator Rezon, docufiction ‘Kristina’ had its world premiere at FIDMarseille in July, where it won the first film award. In Seville, Spasić received the Best Director award for a first or second film.

“For my third festival in Turin, I’m participating with directors of the first, second and third films,” the 31-year-old happily tells Variety. “We never signed up for a world premiere. We applied with a rough cut for the FIDLab, the industrial program of FIDMarseille. After some time, the festival contacted us and said they wanted to program the film. We didn’t sleep for a month but finished it on time. We won a prize at the festival, and that’s how it all started!”

In fact, “Kristina’s” journey began six years earlier: Gvoić discovered Milosavljević on an online TV show and told Spasić about her. Both had been working together for four years. “I had to do a docufiction for my PhD and I was looking for a strong character. We contacted Kristina and met her several times in a cafe. Milanka and I asked her many questions about her life experiences, her dreams and hopes. One day she invited us to her home. When I saw how she decorated her apartment with so much elegance, detail and that religious feeling that was there and was so important to her, that’s when I knew we had a movie,” Spasić tells Variety. “She’s a great character to break down the prejudice for all people who are different and that inspired me.”

The film was shot every fall for five years with cinematography by Igor Lazić and a screenplay by Gvoić that continued to evolve. “Milanka and I are both producers who have given us complete freedom. We updated the script after each block of shooting because we had structured scenes, but we also had observation scenes where we didn’t know how they would turn out.”

They allowed improvisation and Kristina also contributed. Although it revolves around a real character and shows her inner progression, it is not a documentary. “We really wanted to make a movie where you can meet her as a real person, a movie that is genuine. Kristina is a non-professional actress who has a real background in the role she plays and has shot scenes in her own apartment, but all events are fictional,” explains the director, who also teaches at the university.

Kristina only saw the movie a few days ago and has played it over and over. “She loved it. She had complete faith in us and in the film. Kristina, Milanka, Igor and I are really at the heart of this project. We developed a strong bond and we all became friends.”

Ubiquitous in “Kristina” is Belgrade, where the main character and her two best friends spend a lot of time. “Most films in Serbia are about Belgrade. But Milanka and I are not from Belgrade, so we also wanted to show our province. Many of the scenes are inspired by Impressionist art, Spasić explains, also because the French Impressionists treated sex workers as art objects in their works.”

Spasić is pleased with the response abroad and is looking forward to hearing how the film is being received in his home country, where it will be unveiled on November 26. “There are people who distance themselves from transgender issues, who look away. But things are also changing in Serbia and we talk about it a lot.”

Religion, to which the director and screenwriter attach great importance, is also a sensitive issue. “Kristina is very attached to religion and I wanted to bring these two subjects, trans identity and religion, together in my film. It could be risky for an international release, some people would reject the film, but I had the courage to try. In Serbia there are two different countries, one is traditional and the other is more open. With my film I wanted to confront these two worlds. We don’t answer. We wanted to ask questions that our society can think about.”