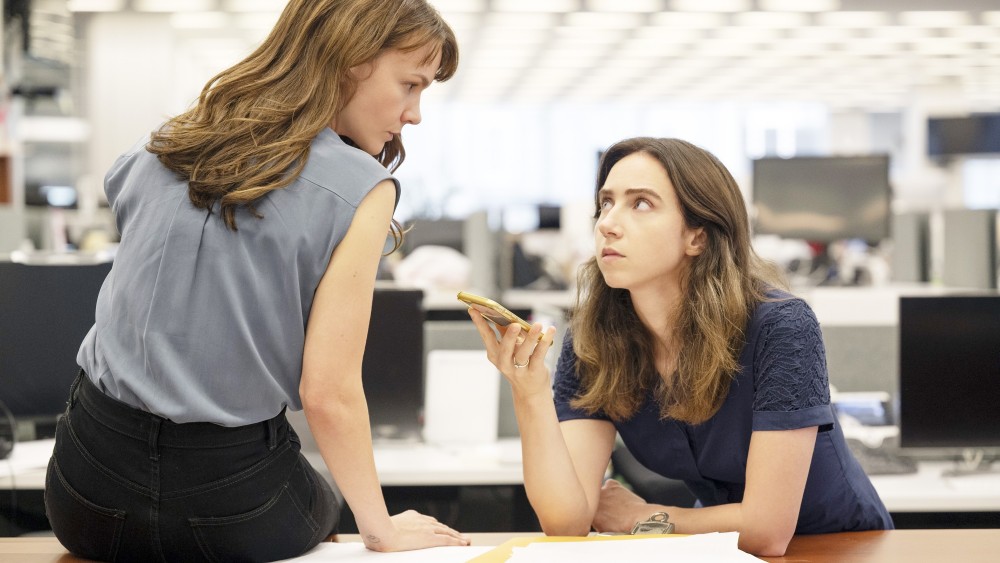 Quentin Tarantino has been blunt about the state of the movie industry. In a recent episode of the director’s “Video Archives Podcast,” the man who helped usher in the golden age of indie film with “Pulp Fiction” declared it to be “the worst era in Hollywood history” matched only through other lows like the 1950s and 1980s.

“The good thing about living in a bad era of Hollywood cinema is that (the movies) don’t conform [are] those that stand out from the pack,” he added.

And that may also be the case. The problem is that this crop of mavericks may no longer have a commercial reason to exist, at least not as theatrical propositions.

Take “She Said,” a solidly crafted look at the pair of intersecting New York Times journalists who helped expose Harvey Weinstein’s decades of sexual harassment and assault. The movie garnered rave reviews and awards, but its Universal Pictures release bombed last weekend, opening to a dismal $2.2 million from 2,022 theaters. That ranks as one of the worst results for a major studio release in history.

Part of the problem, observers say, is that the film’s searing look at abuses of power may not have been what audiences hoped to see at a time when headlines are — let’s face it — pretty bleak. From Ukraine to the economy, there is a lot to be angry about.

“It’s a hard sell,” said Shawn Robbins, principal analyst at Boxoffice Pro. “People are looking for escapism right now. Even an adult audience is looking for something to take them away from reality.”

“She Said” has a lot of company when it comes to well-reviewed films that have collapsed in the public’s schools of indifference. One by one, this year’s Oscar nominees have flopped or, at best, underperformed. There’s ‘Tár’, a drama about sexual harassment in the world of classical music, which grossed $4.9 million in seven weeks; “Armageddon Time,” a coming-of-age movie that grossed just $1.8 million after a month in theaters; and “Triangle of Sadness,” a satirical take on the one percent that has crept up to $3.8 million gross since opening in mid-October. “The Banshees of Inisherin” and “Till” have fared slightly better, earning $7.1 million and $8.5 million respectively, but their results aren’t exactly a hit; they will probably both struggle to turn a profit in their theatrical runs.

“Across the board, it’s a scary time for prestige movies,” said Jeff Bock, an analyst with Exhibitor Relations. “Maybe we are witnessing a big change in cinema. Ultimately, the public decides what gets made, and at this point, the public is not choosing to see these films in theaters.”

Privately, studio executives point out a number of culprits. They say this year’s movie awards are too artistic, too depressing and not enough A-list talent to convince audiences to show up. And they note that there have been success stories earlier this year — most notably “Elvis,” which was aimed at adults and grossed an impressive $286 million worldwide, and “Everything Everywhere All at Once,” a multiverse head trip that grossed $103. raised. million worldwide while being considered artistically daring. But those movies didn’t have to compete with a plethora of other prestige fares, which could further break an already shrinking audience base, one that may be wary of visiting movie theaters during COVID.

“There are a lot of movies out there that haunt an audience that might be a little hesitant to return to the cinema,” said Paul Dergarabedian, senior media analyst at Comscore. “Maybe it’s a little too much of a good thing.”

It’s not all doom and gloom. “,” a horror comedy set in the world of haute cuisine debuted this weekend for a solid $9 million. But it benefited from being associated with a genre that’s doing well at the box office (just look at recent horror hits like “Smile” and “Barbarian”), and had an audience that was skewed younger. The majority of ticket buyers for “The Menu” were under the age of 35, while the majority of spectators for “She Said” were over the age of 45.

There are several more films that are about to brave this harsh environment for prestige. Among those hoping to defy the odds are “Bones and All,” a cannibal romance starring Timothée Chalamet that opened in a limited release; ‘The Fabelmans’, Steven Spielberg’s semi-autobiographical exploration of his childhood; and “Babylon,” an expansive examination of Hollywood’s silent era featuring turns from Brad Pitt and Margot Robbie. “The Fabelmans,” for example, may prove just heartwarming enough to become a must-see for families during the holiday season, but even that film, from one of the entertainment industry’s most successful filmmakers, faces significant headwinds. As for “Bones and All,” it may be too quirky to draw crowds, while “Babylon” could suffer from the divisive response it received in early screenings.

Movie studios have always been risk averse, but their appetite for big swings has only waned in recent years. First, streaming services like Netflix and Amazon came into play, hosting passion projects from the likes of Martin Scorsese and Alfonso Cuarón and conditioning consumers to watch these films at home. Subsequently, a wave of corporate consolidation, driven in part by the pressing need for traditional media players to ramp up for the streaming wars, has led to fewer independent studios to produce theatrical releases. It also left them corporate parents with a lot of debt, making them more hesitant to greenlight the next historical drama or esoteric Bildungsroman at a time when they need to clean up their balance sheet. All this coincided with a pandemic that closed movie theaters for nearly a year and still refuses to die out, as well as record inflation and a looming recession that left people making tough choices about what to do with their dwindling discretionary resources.

So unless movies like “She Said” start doing better at the box office, an entire sector of the feature film industry could be in jeopardy. Something has to change soon.