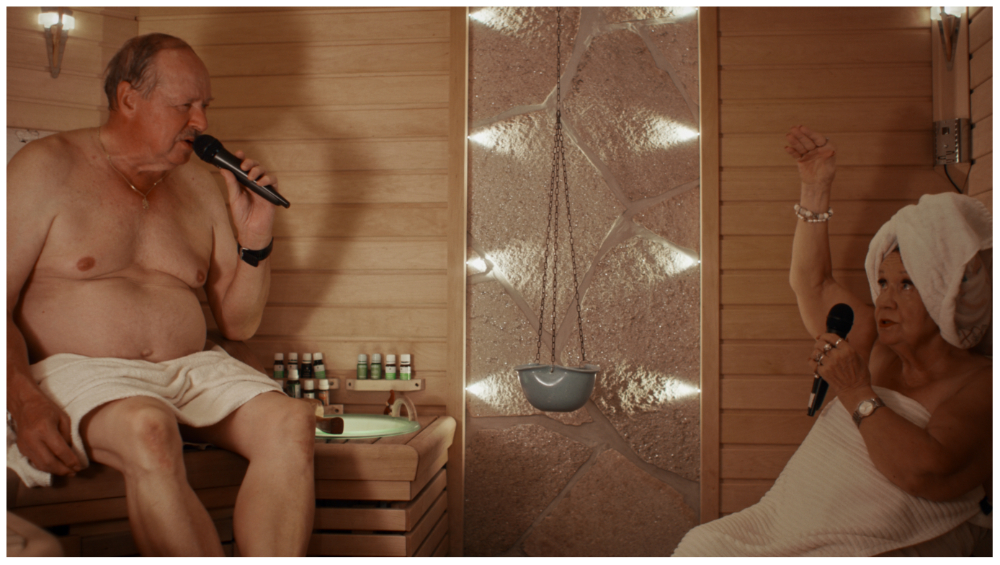 Directed by Einari Paakkanen and produced by Marianne Mäkelä and Liisa Karpo for Napafilms, it premiered on CPH:DOX and was recently nominated for the Best Documentary Award at the European Film Awards.

“It’s one of those rare films that takes a hearty look into the soul of its characters, maybe even the soul of a nation. Finns don’t talk. They sing karaoke,” says Stefan Kloos, director of Rise and Shine, calling it “one of the masterpieces of that dry Finnish humor that we all love.”

“It’s uplifting as we tackle an important issue we can all relate to: how to find happiness.”

Listening to songs and stories from those who take refuge on stage, including Finland’s most experienced karaoke hostess, Paakkanen continues to get close to his protagonists. Illnesses, debilitating shyness, or wavering after the loss of a child.

“Where I grew up, opening up or talking about someone’s emotions wasn’t really encouraged or taught, so it could be why I’m curious about intimate stories,” he notes.

In his 2016 feature film debut “My Father From Sirius,” the Finnish helmer turned the camera on his own family. Especially his father, who claimed he could communicate with aliens.

“There isn’t enough time to live all the lives I wanted. As a documentary filmmaker, I can jump into other people’s lives to observe and wonder.”

Paakkanen is pleased with the way “Karaoke Paradise” has been received outside of Finland, he says, with an international audience paying much more attention to the characters and their hardships than to the actual songs.

“They seem to love these protagonists. I think we managed to portray them in a compelling and heartfelt way and say something universal about who we are, how we survive and find a cure for our problems. Another thing people told me afterwards [seeing] the movie was that it gives them a sense of hope.”

Especially after the pandemic, as wannabe singers form a real community in the film, who come together to experience a moment of joy together.

“One of the first things I did after Covid restrictions were lifted was go out and sing karaoke in a pub,” he adds.

“The songs can be sad or happy, but karaoke is mostly about sharing something,” Paakkanen notes, adding that with this audience, anyone can be a star for three minutes.

“Whether you’re a good or bad singer, short or tall, thin or fat, young or old, it’s all meaningless once you’re on that stage. People will applaud simply for being brave enough to express yourself and show your vulnerability. That’s why I like seeing ordinary people sing.”

“All those mistakes and mistakes, expressions and appearances, they tell a story about us as humans. We are not perfect. To me, karaoke is a celebration of our imperfections.”