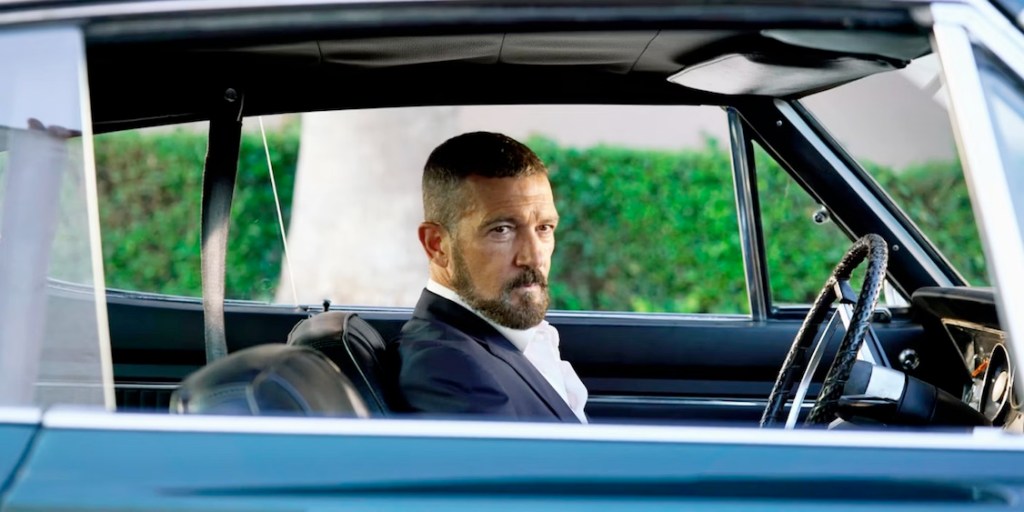 “Tough guy with heart of gold” is the cliché that gives the essence of “The Enforcer”, and not much comes out to refresh or complicate that gray hook. This criminal underworld thriller capitalizes on Antonio Banderas’ star charisma as a veteran mafia strong-arm who turns against his own organization to rescue an endangered teen. Richard Hughes’ feature debut also lifts things up a bit with a slick and stylish presentation. But the results are held too high by original “Point Break” writer W. Peter Iliff’s routine, elemental screenplay to rise above the level of disposable food genre.

Fresh out of prison, Cuda (Banderas) has dutifully taken charge of acts committed in the service of Miami syndicate boss Estelle (Kate Bosworth). He hopes to mend his relationship with his 15-year-old daughter, but she is wary after his long absence, his ex-wife downright hostile. Perhaps as an unfortunate result, he takes a fatherly interest in Billie (Zolee Griggs), a foster runaway who is also 15. He saves her from getting into trouble for shoplifting and provides a motel room to keep her off the street. being too consciously unsafe. Yet Billie is soon kidnapped from that short-term haven, presumably by sex traffickers, and it isn’t long before Cuda learns that the perpetrators are most likely tied to his own employer.

This is the kind of movie that frowns on the exploitation of innocents, while nonetheless giving us plenty of eerie eyes of barely clad babes in strip clubs, kinky sex dungeons, etc. Even more fundamental is the fact that we have to swallow that Cuda – aka “The Barracuda.” ” – is a famously savage enforcer who here duly falls to countless miscreants, but somehow now feels compelled to risk it all for one wide-eyed youngster. Didn’t it occur to him before that Estelle’s ventures run on the fuel of such victimization? It’s somehow beyond the scope of the script to admit any contradiction or evolution in his behavior. He’s just a good villain, that’s all.

While it’s a bit irritating to see him wasted so soon after exceptional, series-stretching turns in films like “Official Competition” and “Pain and Glory,” Banderas brings dignity and gravitas into a role that could have easily borrowed itself from wooden machismo. attitudes. If he cannot improve the material, at least his presence helps to soften its banality. Saddled with some of the worst dialogue, Bosworth lends her villainy a stock of honey-toned duplicity that is one note to Estelle’s flowery exit scene. Decked out in a black vamp wig, that character offers disappointingly few opportunities to a skilled performer who has just eliminated countless layers of ambiguity in both “House of Darkness” and “The Immaculate Room.”

A third kind of protagonist is Mojean Aria, as an uprooted young street fighter who becomes Cuda’s professional protégé. The fact that this figure is called “Stray” tells you how much thought went into the writing, a flaw that this talented Australian actor can’t do much to work out. Supporting parts are skillfully filled in, a few uneven efforts come from staff drafted from the worlds of modeling, hip-hop, “internet celebrity” and so on.

“The Enforcer” does roughly the first hour in neon-noir style, DP Callan Green’s widescreen images, and other design contributions using “warm” colors to attractively convey a predominantly nighttime Miami flavor. (Their success is underscored by the viewer’s amazement when the credits reveal that this film was actually shot in Thessaloniki, Greece.) Bodies pile up in a 20-minute climax revealing that Hughes has quite the flair for organizing action , even if some events really tax credulity . Editors Damian Gomez and Mattias Morheden’s smooth tempo makes for an easy, if not particularly tense or exciting watch.

But the tragic dimension to which the film aspires – unaided by its opening with a major spoiler of things to come – cannot be realized with so little depth to draw from. Reaching for the grandiose, it never grabs anything beyond the generic.

Screen Media opens “The Enforcer” (not to be confused with several other titles of the same title, most notably Clint Eastwood’s 1976 Dirty Harry entry) on 10 US screens on September 23, concurrent with the VOD release.