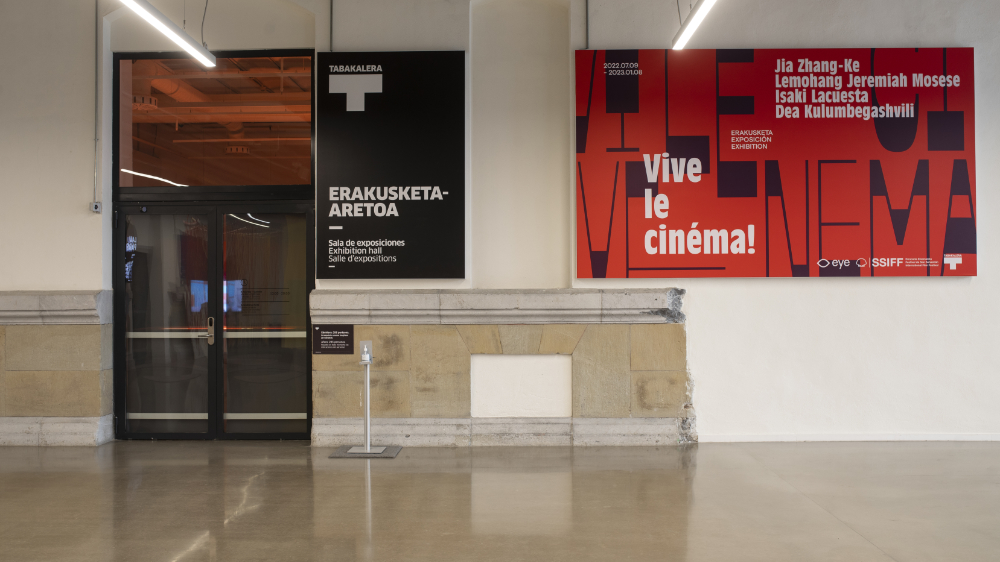 The Center’s exhibition space features four cinematic installations created by leading filmmakers from around the world, a project where they transform their usual film-based practice into a more expansive and experimental gallery space.

The exhibition in Tabakalera is a sequel to the series that started last year in collaboration with the International Film Festival Rotterdam at the Eye Film Museum in Amsterdam. Two works from the 2021 Lemohang Jeremiah Mosese and Jia Zhang-ke exhibition will be shown again in San Sebastián, alongside two new productions by Georgian filmmaker Dea Kulumbegashvili (“Beginning”) and Spanish director Isaki Lacuesta (“One Year, One Night”).

“Our main mission is to promote artistic production and act as a platform to connect a wide audience with the arts of our time,” said Tobakalera’s Cultural Director Clara Montero.

“For Vive le Cinéma, we offered the filmmakers a space to experiment and invited them to go beyond the confines of the cinema screen and play with space, time and audience interactions in a different way.”

For the arts center, Montero adds that “supporting artists and giving a wide audience the opportunity to access contemporary creation and see how artists deal with critical matters are essential to us and representative of the objectives of Tabakalera throughout the year.”

Lemohang JeremiahMosese: ‘Body of Negroes. I will sculpt God, grim and benevolent’

Working with installation and adapting his practice to the medium was not a new challenge for Mosese. Video installation has always been in the back of his directorial spirit and much of his previous work has been tailor-made for both theater and gallery spaces. “Sometimes when I’m shooting certain movie sequences, I know they’re going to end up as an installation, so I make them very long. I’m always in between – my work can exist in both spaces, I think.”

In his piece “Bodies of Negroes. I Will Sculpture God, Grim and Benevolent,” a seven-channel installation that follows a series of works presented at the Humboldt Forum in Berlin in 2021, Mosese explores an “African consciousness, or what we call both in Sesotho. Nietzsche has his uber-human, the ultimate man, and for me both is the ultimate man, or state of being, devoid of suffering.” The work depicts the ritual cleansing of a dying mother by her daughters, through which, Mosese says, “I sew the skins of mothers and fathers into the skins of sons and daughters. My main focus and my greatest interest is the imagery of this ultimate human being, this spirit of African consciousness.”

Lacuesta has similarly worked with the medium several times. His installation practice dates back to 2003 and has coexisted comfortably alongside his cinematic filmmaking. His piece Tabakalera, “Prohibimos en España”, confronts a climate of censorship in Spain, where he says: “over the past five years we have all felt that there are more and more cases of censorship and more attacks on freedom of expression. He adds: “The main newspapers in Spain are very angry about censorship in Iran, for example, but they forget that people are in prison here because they speak out against the king.”

Lacuesta’s installation takes the form of a mirrored cube in which specially developed sensors track the eye movements of the viewers and hide images from forbidden books, films, theater works, songs and even tweets from their gaze. The only way to see the images is through a mirror or a phone camera lens, to “fight the machine,” as Lacuesta explains. It’s a new concept that offers a powerful, immersive look at what it means to demand the right to visibility. Elsewhere at the festival, Lacuesta will be officially selected to present ‘Offworld’, a Movistar Plus+ series that he co-wrote and directed, plus his latest feature film ‘One Year, One Night’ in the Perlak section and an associated installation piece also on display in tobacco calera.

The idea for Kulumbegashvili’s installation piece ‘Captives’ came to the filmmaker before Tabakalera offered her an assignment. “In a way it was really a great coincidence because I was already looking for a place to present the work and of course I have a very special relationship with San Sebastián and I thought it would make perfect sense for this installation to be there life would begin,” she says. Kulumbegashvili had been curious about the form for a while, adding that she “questioned the boundaries of cinema” and was looking for a way to “make a viewer physically part of the work “I wanted the viewer to question their own physical existence,” she continues, “to take away all intellectual notions of our existence and being and really wonder how much we are taking up our physical presence.” feel a certain moment?”

Sound plays a crucial role in “Captives”, which explores the interrelationship between looking and being watched. A creature appears on a curved screen, sitting in a domestic space, while the viewer observes the environment and contributes by creating heightened sounds through floor sensors. As with Lacuesta’s work, the project refers to surveillance and the question of “who gives us permission to look at someone,” Kulumbegashvili says. It was an exciting opportunity to explore new territory for the filmmaker, who had the opportunity to “think about a physical space and how your work is experienced, to really work with something material”, a luxury she says is lacking in cinematic. activities.

World-renowned Chinese filmmaker Jia Zhang-ke, who also works with themes such as surveillance and viewing, presents ‘Close-Up’, a five-channel piece that observes a man standing at a crosswalk through four CCTV cameras and a fifth camera, which is from the director. “I once went into a control room and was amazed at the world perceived by multi-screen monitors,” explains Jia. “In China, where streets are heavily guarded, surveillance cameras are sprouting a new state of footage. How do they compare to movies? What is the uniqueness of film in these new image realms?”

“For this work, the meaning of ‘Close-Up’ has to be realized through multiple screens. The job requires surveillance photography from multiple angles, which provides the visual environment where the close-up shot is,” he adds. While the ‘eye in the sky’ images favor scale over detail, Jia’s own camera rests on the lonely man and invites us to ask ourselves what we pay attention to in an image and why.The director leads the audience to a focal point that would otherwise be lost in a sea of ​​imagery as a means of rejecting the idea that individuals be ‘negligible’.

SSIFF’s director José Luis Rebordinos commented the exhibition as “a new collaboration with Tabakalera that goes beyond the dates of the festival itself and is related to the festival’s intent to be not just a 9-day event, but a festival that takes place all year round, it also means broadening our traditional audiovisual framework by focusing on works by very interesting filmmakers related to the field of installations.”

“It brought together four filmmakers that we admire and created work that went beyond traditional theater,” Rebordinos added. “Jia Zhang-ke is one of the world’s most important and consolidated directors. Lemohang Jeremiah Mosese represents the hope for a quality African film that transcends its continent. Isaki Lacuesta has twice won the San Sebastian Gold Shell and is one of the Spanish directors whose work we follow with interest. Finally, Dea Kulumbegashvili won the Gold Shell in 2020 with her first feature film “Beginning” and we hope to support the future of European cinema,” he concluded.