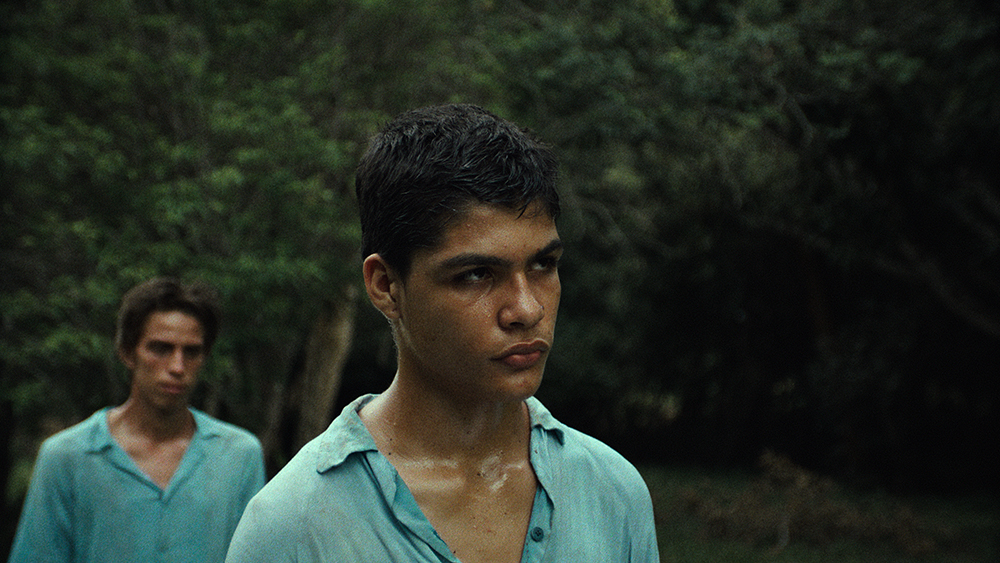 After showing at the Toronto International Film Festival and coinciding with the San Sebastian Arch, Variety has gained exclusive access to the trailer of “La Jauria”, the first feature film from award-winning Colombian director Andrés Ramírez Pulido (“El Edén”).

The film follows the deeply rooted journey of two estranged friends, Eliú (Jhojan Estiven Jimenez) and El Mono (Maicol Andrés Jimenez), who share an uneasy reunion after being sent to a remote and unconventional rehabilitation center to serve their sentences for a cruel crime. There they struggle with responsibility, moral fortitude and redemption. This raises questions about the rampant nature of depravity that looms in the thick, languid atmosphere.

Produced by Jean-Etienne Brat & Lou Chicoteau at Alta Rocca in Paris alongside Johana Agudelo Susa and Pulido’s Valiente Gracia, the storyline naturally folds into the landscape with visually haunting scenic textures that collide with ethereal sound.

“Since writing the script, we have tried to make the film not only heard and seen, but also felt,” said Pulido.

“Some of the elements that I decided to explore, from an aesthetic point of view, were the spatial and temporal “offscreen”, which is where sound plays a very important role in my film, creating a captivating atmosphere that immerses the viewer in a new universe,” he added.

The trailer starts out as a dilapidated pool, filled with rubble, undisturbed. With a slow burn, the youngsters adorn the landscape like ornaments as they divide their days between manual labor and meditation.

An oppressive and harsh climate is represented on screen by furrowed brows, labored breathing and sweat dripping from every pore. The scenes are dark and eerily still, largely set in the grounds of a neglected estate.

Eliú and El Mono navigate their disagreement. While one takes responsibility and tries to move on from the atrocity, the other offers a smooth reminder of the apathy it takes to commit such a crime in the first place.

The score is linked to the profound turmoil of the natural habitat that keeps the boys captive. From the ethereal to the ominous, the raw sounds of insects, birds and waterfalls are preserved, hinting at the themes that lie beneath the surface, away from gossip and discipline.

“Music is the bridge that leads to the invisible and the celestial in the film. That’s why I worked on the original music with Pierre Desprat, he is a very young and talented French musician,” noted Pulido.

“We found that through angelic voices and very low, deep sounds we could evoke what’s happening, not just within the characters, but also what’s happening off-screen that the viewer doesn’t see,” he added.

Shuddering at tackling societal roles in encouraging delinquency, Pulido urges his characters to reveal their motivations and explore deep-seated fortitude.

“One of the aesthetic decisions I made in the feature film was to move away from the hyper-realism expected in Latin American films that deal with social issues and especially marginal communities,” he said.

He continued: ‘It is a film that could be set in any country in Latin America, and even in other tropical places in the world. I wanted to expand the story to a more universal level.”

The film won the top Grand Prix award at Cannes Critics’ Week, making Pulido the first Colombian director to receive the credit for an effort that dissects human nature in a deeply shocking setting without distraction. Standing up to this uncomfortable environment, Pulido captures the full spectrum of the human mind as Eliú’s mind dives in and reflects on its true capacity for permanent improvement.

“I am a man of faith, I believe in change. But maybe the change is not ours, but comes from a touch of grace, from something beyond,” said Pulido.

“For me, violence is implicit in human nature and goes beyond any political, social or economic context. That’s why I decided to focus the film on a dialogue to the intimate, to the depths of our nature. I wanted a film that would allow for a dialogue between what the viewer sees and what’s in it. I think that’s where the real art takes place.”

Sound of 007 in concert at Royal Albert Hall: review

Malala Yousafzai to helm Pakistan’s ‘Joyland’ as an executive producer